Caroline McAlister, college professor and life-long skeptic, is reeling from the loss of her father and her marriage. Her once promising career has come to a standstill. She didn’t realize her father held onto the family cabin until he bequeathed it to her, and with it, the ghost who haunted her childhood. When she discovers a century-old journal in the attic, she awakens the voice of Carson Quinn. The journal reveals Carson’s love for the same hollow that enthralled Caroline growing up. A little sleuthing uncovers rumors that the kind, curious boy in the journal grew up to murder his brother. Caroline plunges into the project of exonerating Carson, only to find herself in the throes of a personal past she’s spent her life trying to avoid. Hemlock Hollow is about how we forever haunt the places we love and how they haunt us in return.

The Secret Garden of Yanagi Inn

Amber A. Logan's 2022 Debut The Secret Garden of Yanagi Inn launches November 15th. Grieving her mother’s death, Mari Lennox travels to Kyoto to photograph Yanagi Inn for a client. As she explores the inn and its grounds, capturing images of the old resort and an overgrown, secret garden, eerie weeping that no one else seems to hear keeps her awake at night. Despite the warnings of the staff, Mari searches the building to discover the source of the ghostly sound, only to realize that her own family’s history is tied to the inn and its mysterious, forlorn garden.

Leave the Night to God

Leave the Night to God, by R. L. Peterson, launches November 8th from Regal House. From the publisher's website:

Twelve-year-old Frankie Walker’s whole world is baseball, Daddy, and foxhunting. Daddy’s stroke forces Frankie to learn to survive on his own—or become a permanent resident of the Missouri Orphan’s School and Residence. With the help of a fellow orphan, Frankie bolts the orphanage and hooks up with a Black barnstorming baseball team and their young, female pitcher, Linda. Frankie soon learns, nothing good lasts. When Linda drops him at the bus station, so he can join Daddy in Kansas, he’s mistaken as Linda’s child and abducted by the Ku Klux Klan. Facing death by torture, Frankie is saved by Paul. When Frankie and Daddy finally reunite, Daddy’s stroke has left him stiff and silent as a tombstone. There’ll be no more nights chasing their foxhounds, but Frankie has learned on his long and harrowing journey that he’s a survivor. Set in America’s Midwest of the 1950s where racial injustice still has a tight grip, Leave the Night to God proves that kindness may be found in unexpected places, that “family” is not about the color of one’s skin, and to remain true to one’s values is what it means to be a man.

As a child, Elizabeth Winthrop Alsop, along with her five brothers, was raised to revere the tribal legends of the Alsop and Roosevelt families. Her parents’ marriage, lived in the spotlight of 1950s Washington where the author’s father, journalist Stewart Alsop, grew increasingly famous, was not what either of her parents had imagined it would be. Her mother’s strict Catholicism and her father’s restless ambition collided to create a strangely muted and ominous world, one that mirrored the whispered conversations in the living room as the power brokers of Washington came and went through their side door. Through it all, her mother, trained to keep secrets as a decoding agent with MI5, said very little. In this brave memoir, the author explores who her mother was, why alcohol played such an important role in her mother’s life, and why her mother held herself apart from all her children, especially her only daughter. In the author’s journey to understand her parents, particularly her mother, she comes to realize that the secrets parents keep are the ones that reverberate most powerfully in the lives of their children.

A Knit of Identity

A Knit of Identity, by Chris Motto, launches October 18th from Regal House. From the publisher's website:

“When Dennis died, I heard a sound, and then in a matter of seconds shit hit the fan, but then I heard it again, and for the first time I heard the sound of the sky talking to me. Floating in the middle of it, wrapped in the center of it, I learned that the sky not only has a very distinct voice, but it has a lot to say.” Danny Fletcher’s life has never been great. Her father was on the road driving big rigs, and her mother was always left waiting. As soon as she was old enough, Danny followed in her father’s footsteps, deciding never to be the one waiting. From that point on tragedy followed her everywhere. The death of a friend, the death of an enemy, the death of her parents. All this sorrow on top of being constantly alone, Danny is left struggling to find her identity in a world that doesn’t want her. That is until she stumbles into hole-in-the-wall bar in a small South Carolina town. There she meets Jesse. A friend? A partner? A reason to stop running? Can she face her demons, or will Jesse become just another reason to run?

In the Running for a Stonewall Award

I'm pleased to announce that The American Library Association's Stonewall Book Awards have requested copies of In Search of the Magic Theater for consideration.

Each year, the Rainbow Round Table (RRT) of the American Library Association (ALA) honors books of exceptional merit with significant LGBTQ+ themes with its Stonewall awards. Eligible books must be new publications in North America in English copyrighted in 2022. The Barbara Gittings Literature Award Committee evaluates adult fiction as defined as any novels, short stories, poetry, and dramas/plays.

Titles for adult 2023 awards and honor books will be announced at the ALA/RRT Social during ALA’s 2023 January Midwinter Meeting. The books will also be honored at the Stonewall Book Award Presentation during the ALA Annual Conference in June 2023. Awards consist of a commemorative plaque and a cash award of $1000; winners of honor books receive a certificate.

The award is announced in January and presented to the winning authors or editors at the American Library Association Annual Conference in June or July. 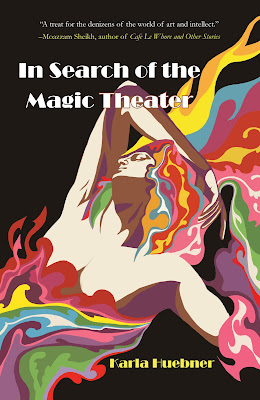 Self-Portrait With Nothing, a 2022 Debut by Aimee Pokwatka, launches October 11th. Abandoned as an infant on the local veterinarian’s front porch, Pepper Rafferty was raised by two loving mothers, and has married a stable, supportive husband. She’s never told anyone that at fifteen she discovered the identity of her biological mother--the reclusive painter Ula Frost, who's famous for claiming that her portraits summon their subjects’ doppelgangers from parallel universes. Pepper can’t help but wonder if there's a parallel universe in which she was more confident, more accomplished, better able to accept love--a universe in which Ula decided she was worth keeping?

In Search of the Magic Theater

Find Me Here Too